The Radial Basis Function (RBF) network is one of the most widely used surrogate models in multidisciplinary design optimization. However, one of the challenges of applying the RBF network to engineering problems is how to efficiently optimize its width parameters. In this work, a novel space division–based width optimization (SDWO) method is proposed to decompose the complex multivariable width optimization into several small-scale single-variable width optimizations. The SDWO method consists of two main steps. First, a two-stage fuzzy clustering algorithm is carried out to group the samples and divide the input space into several overlapping local regions, and the overlapping degree is controlled by a dimensionless expansion factor. Second, in each local region, one small-scale local RBF network (LRBFN) is constructed by solving a single-variable optimization problem when the LRBFN is needed for prediction. All these LRBFNs are independent of each other and can be constructed in parallel. The proposed method is efficient and particularly suitable for large sample sets. Test results of four sample sets verify that the proposed SDWO method has better performance than the conventional width optimization method in terms of both training efficiency and approximation accuracy. An inter-stage structure optimization is carried out, which demonstrates the efficiency of the proposed method in practical engineering applications. 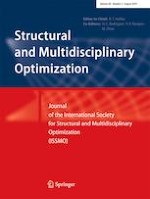 A Python script for adaptive layout optimization of trusses