An empirical 3-D model was developed to evaluate the effect of ambient environment on the mechanical properties and degradation behavior of bamboo-bundle laminated veneer lumber (BLVL) fabricated with different levels of PF/PVAc resin. This model can describe the relationship between the modulus of elasticity (MOE), water absorption ratio, and aging temperature. Five levels of PF/PVAc weight ratio (2:1, 4:1, 6:1, 8:1 and 10:1) and three treatment conditions (18, 63, and 100 °C) were examined in this experiment. Computed tomography (CT) scanning technology was employed to observe the morphology of damage degree as well as explore the mechanism of degradation behavior of BLVL. The results indicated that the 3-D model used for tracking and monitoring the variance of MOE provided good predictors. The higher the water impregnation temperature the larger the water absorption ratio and the higher the MOE degradation were. The aging temperature had a significant effect on the mechanical properties and degradation behavior of BLVL. A linear relationship between modulus of rupture (MOR) degradation and aging temperature was observed. The degradation rate of MOE and MOR increased as the temperature increased. The aging degree tested by CT along with damage of inner board showed the PF/PVAc ratio had a significant influence on the mechanical degradation of treated BLVL when the PF/PVAc ratio was below 6:1. Localized yielding, micro-cracks developing between interfaces, PVAc resin softening along with delamination, and debonding were the main failure models for the BLVL by hygrothermal aging treatment. 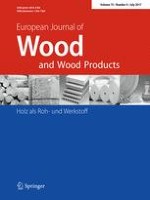