The online version of this article (https://​doi.​org/​10.​1007/​s10040-018-1797-z) contains supplementary material, which is available to authorized users.
This article is part of the topical collection “Celebrating 50 years of SWIMs (Salt Water Intrusion Meetings)”

The famous report by engineers Drabbe and Badon Ghijben (1889), on an intended well drilling near Amsterdam (the Netherlands), was one of the key documents that contributed to the Ghijben-Herzberg formula, which links water-table elevation to the depth of the freshwater–saltwater interface in coastal aquifers. The report has been often cited but no English translation has appeared in the literature to date. The aim of this annotated translation of the report is to provide the international scientific community with easier access than was hitherto the case, plus electronic access to the original in Dutch. A brief introduction to the report is provided, followed by a translation that follows the original text as closely as possible. 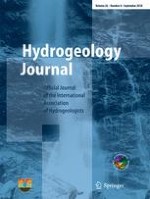 Groundwater flow in the transition zone between freshwater and saltwater: a field-based study and analysis of measurement errors

Hydrogeologic and hydraulic characterization of aquifer and nonaquifer layers in a lateritic terrain (West Bengal, India)