We examined the effects of social and cultural contexts on smiles displayed by children during gameplay. Eight-year-old Dutch and Chinese children either played a game alone or teamed up to play in pairs. Activation and intensity of facial muscles corresponding to Action Unit (AU) 6 and AU 12 were coded according to Facial Action Coding System. Co-occurrence of activation of AU 6 and AU 12, suggesting the presence of a Duchenne smile, was more frequent among children who teamed up than among children who played alone. Analyses of the intensity of smiles revealed an interaction between social and cultural contexts. Whereas smiles, both Duchenne and non-Duchenne, displayed by Chinese children who teamed up were more intense than those displayed by Chinese children who played alone, the effect of sociality on smile intensity was not observed for Dutch children. These findings suggest that the production of smiles by children in a competitive context is susceptible to both social and cultural factors. 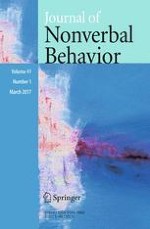 Can I Trust You? Laterality of Facial Trustworthiness in an Economic Game

Evidence of Big Five and Aggressive Personalities in Gait Biomechanics