This study considers the steady-state, non-reacting mixing of fuel and air within the hydrogen-air Rotating Detonation Combustor (RDC) currently in use at TU Berlin. The interaction of reactants occurs in a confined jet-in-crossflow (JIC) configuration with an axially injected fuel jet and an air stream entering radially inwards. The investigation of the baseline flow case provided three flow characteristics primarily responsible for affecting the process of mixing: supersonic shock patterns, the existence of two major recirculation zones, and a counter-rotating vortex pair (CVP) structure. In a parametric study with nine different flow configurations, attained by the variation of reactant inlet flow rates, the effect on mixing behavior and performance was analyzed in order to determine the most impactful parameter for the RDC refill process. The air mass flow rate was identified as the primary parameter with respect to the general flow field due to the interaction of a dominant air barrel shock with the fuel jet. The low flow rate cases allowed the greater fuel and air jet interaction in the near injection region of the combustor, whereas in the far field the higher flow rate configurations attained comparable mixing quality despite more complicated fuel and air jet shock structures. 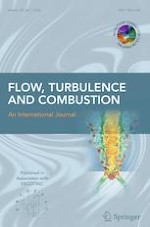 Correction to: Time Scales and Turbulent Spectra above the Base of Stirred Vessels from Large Eddy Simulations