Differences in Roma and non-Roma students’ ratings of their peers’ popularity: an inquiry into the oppositional culture in Hungarian schools with the use of a survey experiment | springerprofessional.de Skip to main content
TOOLBAR 1 2 3 4
SUCHE MENÜ 1 2 3 4

Oppositional culture theory posits that students who belong to oppressed ethnic minority groups define their ethnic identity in opposition to the majority of students. Minority students might restrict their achievements and effort in schools to gain popularity since they believe that their peers regard investing in pro-school attributes as a betrayal of their own culture and adaptation to the majority culture. Thus, peer pressure might explain why minority students’ performance lags behind that of their majority peers. We tested this theory among 584 seventh- and eighth grade (13–14-year-old) students in 38 ethnically diverse Hungarian classrooms. We conducted a vignette experiment in which students rated the “coolness” of fictive vignette persons whose attributes (GPA, effort, and school behavior) were randomly combined. Each student rated 12 randomly chosen vignettes. We found that Roma students rated their peers as less popular if the peers had a good GPA in classrooms with high ethnic diversity. We did not find a significant Roma/non-Roma gap in pro-school attributes in other domains such as effort and school behavior, or in non-pro-school attributes in any domain. Accordingly, we conclude that differences in ethnic identity explain little of the Roma/non-Roma achievement gap in Hungarian schools. Therefore, oppositional culture between Roma and non-Roma students appears to occur in context-specific and sporadic ways in Hungary.

Titel
Differences in Roma and non-Roma students’ ratings of their peers’ popularity: an inquiry into the oppositional culture in Hungarian schools with the use of a survey experiment
Autor:
Tamás Keller 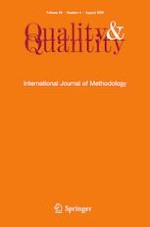 The hotly debate of human capital and economic growth: why institutions may matter?

Motivation in sport and exercise: a comparison between the BRSQ and BREQ

Factors with significant impact on efficiency of research laboratories: case of the public university

An empirical analysis of social media usage, political learning and participation among youth: a comparative study of Indonesia and Pakistan

Topic modeling, long texts and the best number of topics. Some Problems and solutions