The dynamics of organic carbon (OC), turbidity, faecal indicator bacteria and physicochemical parameters was studied in a karst system near Yverdon, Switzerland. Online measurements and sampling were done at a swallow hole draining an agricultural surface (the input), and two groups of springs (the outputs) that often show bacterial contamination. A fluorescent tracer that was injected into the swallow hole during low-flow conditions first arrived at the springs 10–12 days after injection; the total recovery rate was 29%. Previous tracer tests during high-flow conditions gave shorter travel times. After a major rainfall event, a primary turbidity peak was observed at the springs. It coincides with the rising limb of the hydrograph, indicating remobilisation of autochthonous particles from the aquifer. A secondary turbidity peak occurs several days later, suggesting the arrival of allochthonous particles from the swallow hole. Wider peaks of OC and bacteria were observed simultaneously. Applying methods from molecular microbiology (PCR-DGGE) allowed characterisation of the bacterial communities at the swallow hole and the springs. The results demonstrate that the swallow hole is an important source of groundwater contamination, while its contribution to aquifer recharge is insignificant. OC appears to be a better indicator for bacterial contamination than turbidity. 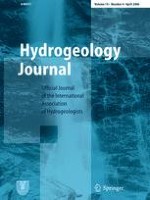 Conceptual hydrodynamic model of the Pamukkale hydrothermal field, southwestern Turkey, based on hydrochemical and isotopic data

Use of remote sensing and GIS to determine recharge potential zones: the case of Occidental Lebanon

Occurrence of salt water above fresh water in dynamic equilibrium in a coastal groundwater flow system near De Panne, Belgium