Recent research has revealed that a large proportion of entrepreneurs start-up their ventures operating on a wholly or partially off-the-books basis. Until now, it has been commonly assumed that those who operate in the informal economy are exclusively commercial entrepreneurs. They are assumed to be rational economic actors who weigh up the benefits of operating off-the-books against the costs of being caught and decide to operate in this manner. The aim of this paper is to evaluate critically this a priori assumption. Reporting evidence from a 2005/6 survey involving face-to-face interviews with 102 informal entrepreneurs in Moscow in Russia, the finding is that such entrepreneurs are not purely commercially driven. Examining their rationales, informal entrepreneurs are found to range from purely rational economic actors pursuing for-profit logics through to purely social entrepreneurs pursuing purely social logics, with the majority somewhere in-between combining both for-profit and social rationales. Neither do their logics remain static over time. What begins as a commercial entrepreneurial venture may become more socially oriented over time or vice versa. So too do their logics vary socio-spatially. Those living in deprived populations are more socially-orientated, whilst those in relatively affluent populations are comparatively more profit-driven. The outcome is a call for a more nuanced explanation of the complex and heterogeneous logics of informal entrepreneurs. 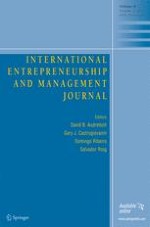 Do board composition and investor type influence innovativeness in SMEs?

Corporate entrepreneurship in Switzerland: evidence from a case study of Swiss watch manufacturers