An image pattern recognition system, consisting of a CMOS camera, a set of illumination devices, and a lab-developed machine vision image analysis software, has been developed for evaluation of tool scraping wear conditions. The images of the scraped surface texture on the workpiece were generated by lab-developed automatic scraping machine under controlled conditions; the image was first transformed by Haar wavelet transform with Otsu’s algorithm to discriminate the vertical details of surface patterns, and they were then emphasized by weighted calculations according to tool scraping wear conditions. The experimental results show that the average difference between the data obtained from the surface image analysis and the roughness measurement is about ± 2%, proving the feasibility of the proposed system. Furthermore, a statistic analysis reveals that the standard deviation of the non-zero proportion of the medium frequency domain obtained by image processing might be considered a significant reference for tool replacement. For the field applications, the proposed system provides the capability of online scraping tool wear evaluation for scraping process in manufacturing site, compared with the traditional scraping tool wear evaluation method, which was time consuming; user needs to remove the workpiece to measure instrument. 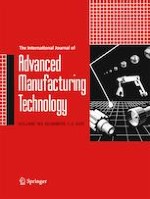 The use of support vector machine, neural network, and regression analysis to predict and optimize surface roughness and cutting forces in milling