Key supplier-side factors that affect the usage level of mobile Internet were identified and the procedural mechanism among the independent and dependent variables was investigated. For this, a research model was introduced to describe associations among four external variables (access quality, service variety, cost rationality, and ease of use), an intermediate variable (usefulness) and a dependent variable (the usage level of mobile Internet). Through the on-line survey, data were gathered from actual mobile Internet users. Confirmatory factor analysis and path analysis were applied to test the overall integrity of the research model and of proposed hypotheses. All four external variables affected user perceptions on the usefulness of mobile Internet. Among them, service variety and cost rationality had a relatively larger influence on perceived usefulness. Perceived usefulness of the mobile Internet had a positive effect on its usage, confirming the important role of usefulness as a significant mediator between the four external variables and the dependent variable. Meanwhile, the cost rationality was the only external variable with direct influence on the MI usage. Theoretical and practical implications of the study results are discussed. 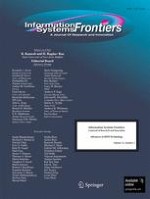 Automated management of assets based on RFID triggered alarm messages

Ubiquitous RFID: Where are we?