A considerable number of deep engineering cases show that strain rockbursts occur on both sidewalls of circular caverns and ultimately form a symmetrical V-shaped notch. To investigate the occurrence process and mechanism of strain rockbursts in deep circular cavern under high stresses, simulation experiments under four different three-dimensional (3D) stress conditions were conducted on cubic granite specimens with a prefabricated circular hole using the true-triaxial electro-hydraulic servo mutagenesis testing system. The rock bursting process was monitored on the sidewalls of the hole and recorded in real-time with a wireless microcamera. The results show that the entire rock bursting process on the sidewalls can be divided into four distinct periods for every 3D stress condition: calm period, pellet ejection period, rock fragment exfoliation period, and rock bursting period. Under the conditions that the vertical stress is constant and the horizontal radial stress is equal to the horizontal axial stress, the rockburst severity of the sidewalls clearly decreases with increasing horizontal stress. When the vertical stress is constant and the horizontal axial stress is low, the rockburst severity clearly decreases with the increase of horizontal radial stress. In contrast, when the horizontal axial stress is high, the rockburst severity becomes more serious with increasing horizontal radial stress. During the process of rock fracture and bursting, the damage zones on both sidewalls form two symmetrical V-shaped notches, and the line connecting the centres of the two V-shaped notches is perpendicular to the maximum principal stress direction. The symmetrical V-shaped failure modes on both sidewalls under the four stress conditions are in line with the statistical relationship of the far-field stress state and failure mode of a deep circular cavern without support (Martin et al. in Can Geotech J 36(1):136–151, 1999). 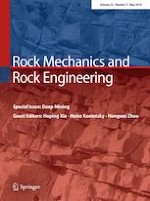