In Liu and Qiu (J Sci Comput 63:548–572, 2015), we presented a class of finite difference Hermite weighted essentially non-oscillatory (HWENO) schemes for conservation laws, in which the reconstruction of fluxes is based on the usual practice of reconstructing the flux functions. In this follow-up paper, we present an alternative formulation to reconstruct the numerical fluxes, in which we first use the solution and its derivatives directly to interpolate point values at interfaces of computational cells, then we put the point values at interface of cell in building block to generate numerical fluxes. The building block can be arbitrary monotone fluxes. Comparing with Liu and Qiu (2015), one major advantage is that arbitrary monotone fluxes can be used in this framework, while in Liu and Qiu (2015) the traditional practice of reconstructing flux functions can be applied only to smooth flux splitting. Furthermore, these new schemes still keep the effectively narrower stencil of HWENO schemes in the process of reconstruction. Numerical results for both one and two dimensional equations including Euler equations of compressible gas dynamics are provided to demonstrate the good performance of the methods. 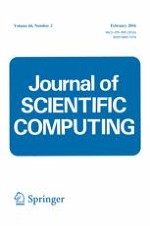 Trapezoidal Rule for Computing Supersingular Integral on a Circle