Recently, the development of confidentiality and authenticity ensured by image encryption has been one of the key advancements in the field of secured wireless communication. The proposed work focuses on providing confusion, diffusion and permutation inherently in the system. The input grayscale image is shuffled by employing the Henon algorithm and subsequently separated into 8 bit planes. With the aid of a secret key of 256 bits, chaotic sequences are generated for each bit plane. Later, the logistic map is adapted on the chaotic sequences to obtain the scrambled image. Furthermore, this image is shuffled with Zaslavskii and Hilbert Space Filling Curve algorithms, which establishes the confusion stage. To incorporate the diffusion stage, a self-invertible matrix is generated by a latin square image cipher and a secret key. This matrix and the scrambled image underwent the Hill cipher to build the encrypted image followed by a row-column transformation to ensure multifold security. The proposed compound activities of encryption are successfully implemented on the laboratory virtual instrumentation engineering workbench 2013 platform. Noticeably, the established processes of image encryption are tested in the universal software radio peripheral environment and transceived via an additive white Gaussian noise (AWGN) channel. More specifically, the influence of natural and unnatural (cropping attack) noise on the characteristics of the encrypted image while sharing through AWGN channel has been investigated. Security analysis is performed by computing the unified average changing intensity, number of pixels change rate, correlation value, large key space to defy brute force attack, strong key sensitivity and uniform gray value distribution on encryption. 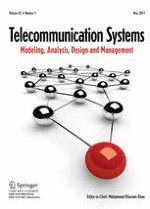 Routing protocols for underwater wireless sensor networks based on data forwarding: a review