Ensuring stability and extending network lifetime in Wireless Sensor Networks (WSNs) achieved through significantly reduced energy consumption is considered as a potential challenge. The selection of Cluster Head (CH) during the process of clustering is determined to be highly complicated in spite of its role in facilitating efficient and balanced energy consumption in the network. In this paper, Hybrid Stochastic Ranking and Opposite Differential Evolution enhanced Firefly Algorithm (HSRODE-FFA)-based clustering protocol is proposed for handling the issues of location-based CH selection approaches that select duplicate nodes with increased computation and poor selection accuracy. This HSRODE-FFA clustering scheme includes the process of sampling for selecting the CHs from among the sensor nodes that exist in the sample population and address the problems introduced by different locations of nodes and CHs. It is proposed as an attempt to improve stability and lifetime of WSNs based on the merits of Stochastic Firefly Ranking (SFR) that enhances the exploration capability of Firefly Algorithm (FFA). The hybridization of the enhanced FFA with Opposition Differential Evolution (ODE) aids in speeding and ensuring optimal exploitation in the selection of CHs. The proposed HSRODE-FFA thereby maintains a balance between the rate of exploitation and exploration for deriving mutual benefit of rapid and potential selection of CHs from the sampling population. The experimental results of the proposed HSRODE-FFA scheme confirm an enhanced stability period and network lifetime of 16.21% and 13.86% respectively in contrast to the benchmarked Harmony Search and Firefly Algorithm-based Cluster Head Selection (HSFFA-CHS), Krill Herd Optimization and Genetic Algorithm-based Cluster Head Selection (KHOGA-CHS), Particle Swarm Optimization with Energy Centers Searching-based Cluster Head Selection (PSO-ECS-CHS) and Spider Monkey Optimization-based Cluster Head Selection (SMO-CHS) schemes. 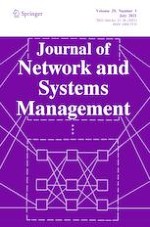 Knowledge Discovery: Can It Shed New Light on Threshold Definition for Heavy-Hitter Detection?

AS-IDS: Anomaly and Signature Based IDS for the Internet of Things