Based on the principles of mass conservation, momentum, and energy, an improved version of the Desalination pipeline called Improved Desalination Pipeline System (IDPS) has been studied in the present paper. The main features of IDPS are the high transfer rate and the high raw water production rate. IDPS works with the help of thermal gradient generated due to the temperature difference between the seaside/destination. Heat injection has also been used to increase the efficiency of IDPS. In the condensation part, the heat pipe concept is adopted to facilitate the vapor-liquid process. The main portion of heat injected to the IDPS is recovered by generating electrical power using water flow due to available water head. To show the efficiency of IDPS, a case study is performed from Bandar Abbas (seaside) to Mount GNU (the destination) located30 km away with 2347 m height. The results show that IDPS does not necessarily require large diameter pipes for greater efficiencies. The energy consumption for distillation and transferring1 m3 of water is about 6.6 Kwh. In addition to the distilled transferred water, a significant amount of water is distilled on the site, which is about 25% of the transferred water. 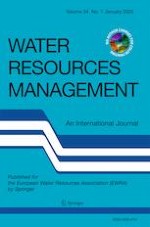