The influence of pressure rate on dendritic growth kinetics in solidification of succinonitrile was studied via in situ observation based on a novel apparatus established in our previous work and using phase-field modeling where a pressure term associated with pressure rate was introduced. The experimental and simulation results revealed that dendrites grew much faster at higher pressure rate, resulting in dendrites characterized by more developed secondary arms and larger secondary dendrite arm spacing (SDAS), while dendrites growing at lower pressure rate was more cellular-like with small secondary arms. Higher pressure rate facilitated the competitive growth of dendrites, which led to fewer but larger dominate primary dendrites and larger primary dendrite arm spacing (PDAS) in the final microstructure. The cellular-to-dendrite transition (CDT) was more advanced at higher pressure rate, and it was demonstrated that it was the higher pressure rate not the high value of pressure that motivated CDT, via elevating effective undercooling and thus growth velocity at CDT moment. Furthermore, the growth kinetics was analyzed quantitatively, and the variation of tip velocity at different pressure rates was consistent with that of the corresponding undercooling induced by pressure and thermal condition. Moreover, the slope of growth and re-melting velocity—the tip acceleration—increased with pressure-rising rate and pressure-declining rate, respectively, even in a complicated periodic pattern, which was qualitatively consistent with the theoretical relationship of tip acceleration and pressure rate.

Titel
In situ observation and phase-field simulation on the influence of pressure rate on dendritic growth kinetics in the solidification of succinonitrile
Autoren:
Shan Shang
Zhiqiang Han 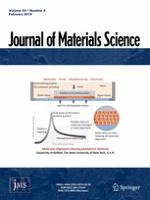 Effect of biomass on reaction performance of sintering fuel