Around 120 years ago the Swiss engineer Alfred Büchi began experimenting with the pre-compression of the air that goes into an engine. His aim was to improve the power and reduce the fuel consumption of the engine, while keeping its capacity unchanged, by improving its efficiency. Today we would call this downsizing. In 1905 Büchi took out the patent for the first turbocharger, but he was way ahead of his time. It was not until the 1930s that turbochargers began to be widely used in ships, locomotives, and industrial applications. With hindsight we can see that this hugely significant invention played a pioneering role in engine development. For many decades turbocharging has been one of the key methods of improving the efficiency and performance of engines and an integral part of the overall engine concept. It is almost unique in the way it shapes the characteristics of the engine, because it has a major influence on fuel efficiency, dynamics, and emissions. …
Anzeige
Vorheriger Artikel News
Nächster Artikel New ABB Sequential Turbocharging System — Fuel Savings for Large Two-stroke Engines 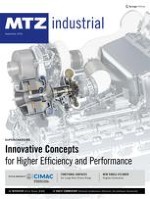