This study investigates the role of rainfall forecast system characteristics in predictive real-time optimal operation (PRTOP) of urban drainage systems (UDSs). A simulation-optimization model is proposed integrating the stormwater management rainfall-runoff simulator, the harmony search optimization algorithm, and a rainfall forecasting module. This module generates different rainfall forecast scenarios depending on the forecast (time) horizon (FH) and the forecast type (perfect or imperfect). Five adaptive PRTOP models are compared to evaluate the relationships between the FH, forecast type, and the system’s relative regulating capacity (SRRC). The models are tested in a part of UDS of Tehran, capital of Iran. Results indicate that for the studied system, perfect knowledge of future rainfall is more beneficial for a specific range of the SRRC, equal to 80–90% of its upper bound. Besides, the performance of the PRTOP model improves with increasing the FH up to a certain point, and then having no further positive effect. Finally, the PRTOP model equipped with a hypothetical forecasting model where the forecast error is a nonlinear function of the forecast lead time still performs better than both a zero-FH reactive RTOP model and short forecast horizon PRTOP models. 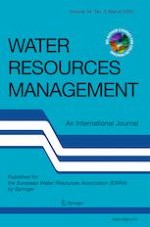