One of the most significant events in China’s history of engaging international law was its legal defeat in the South China Sea Arbitration case. The case was brought by the Republic of Philippines on its disputes with China concerning maritime entitlements in the South China Sea. The Arbitral Tribunal ruled in favor of the Philippines, first on the jurisdiction and admissibility issues in October 2015, and finally on the merits in July 2016. China not only refused to accept the Tribunal’s authority, but also vigorously attacked the final award as being invalid and even illegal. This paper critically examines the different views, particularly the Chinese perspectives, on three major legal aspects of this case, including (1) the legitimacy of the Arbitral Tribunal, (2) whether the Tribunal had jurisdiction over the case, and (3) whether the Tribunal erred in applying UNCLOS on certain important legal issues concerning the merits of the case, in light of the two awards (the SCS Jurisdiction Award and the Merit Award) and the relevant rules and doctrines in international law. The paper then argues that, while the Tribunal’s own legitimacy seems to be unquestionable, whether it had jurisdiction over the dispute is debatable. Most likely it has, but China’s certain arguments against the jurisdiction are worthy of discussion. However, the final award’s interpretation and application of certain provisions of UNCLOS are problematic and possibly erroneous. The analysis, however, suggests that China would have been in a much better position on the legal front had it formally participated in the case from the jurisdictional stage. Finally, the paper discusses the implication of the arbitration on China’s attitude toward international law. 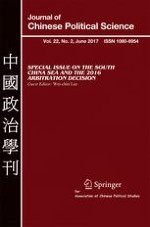 Introduction: the South China Sea Dispute and the 2016 Arbitration Decision

John W. Garver, China’s Quest: The History of the Foreign Relations of the People’s Republic of China

Taiwan, the South China Sea Dispute, and the 2016 Arbitration Decision