Double-step scale splitting (DSS) iteration method is proved to be an unconditionally convergent iteration method, which is also efficient and robust for solving a class of large sparse complex symmetric systems of linear equations. In this paper, by making use of the DSS iteration technique as the inner solver to approximately solve the Newton equations, we establish a new modified Newton-DSS method for solving systems of nonlinear equations whose Jacobian matrices are large, sparse, and complex symmetric. Subsequently, we investigate the local and semilocal convergence properties of our method under some proper assumptions. Finally, numerical results on some problems illustrate the superiority of our method over some previous methods. 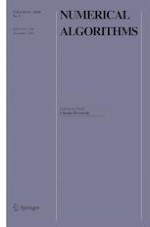 Numerical methods based on the Floater–Hormann interpolants for stiff VIEs