On the Distortion and Warpage of 7249 Aluminum Alloy After Quenching and Machining | springerprofessional.de Skip to main content
TOOLBAR 1 2 3 4
SUCHE MENÜ 1 2 3 4

The objective of this study is to determine the effect of solution treatment temperature, quenching media, and various machining sequences on the warpage behavior of aluminum 7249 alloy aged to T6 and T7′ tempers. Large extrusions of 7249 aluminum alloy with fins were cut into 108 “T” sections. The samples were solution-treated, aged, and machined. Three solution temperatures (445, 474, and 505 °C), two quenching media (water and 20% polyalkylene glycol), two aging treatments (T6 and T7′), and three machine sequences were used. The flatness of the samples was measured on the surfaces orthogonal to the z-axis. Three points were on top of both shoulders (six total), six were at the bottom of the sample, and six were on the top of the fin, in the cases where the fin was not milled off. They were then averaged together by surface to represent the overall warpage of each sample. 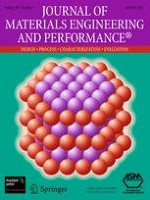