The structural behaviour of beam-to-column joints plays a key role in the seismic response of frame structures. Regarding to steel storage pallet racks, experimental tests have highlighted that the hysteresis loop of their joints is characterized by the pinching, with the consequence of a reduction of the dissipated hysteretic energy and load carrying capacity. In this paper the authors propose a simplified numerical pinching model capable to simulate the mechanical response of beam-to-column joints under cyclic loads. To develop and check this model, several comparisons are performed with both literature data and experimental results of laboratory tests. The proposed model is characterised by three links placed in parallel: two “composed links” describe the non-linear bending moment-rotation curve of the joint, and a linear elastic link transfers the axial and shear force from the beam to the column. The model is appropriate for predicting the down-aisle seismic response of rack systems and it can be easily implemented in commercial software packages, commonly used for non-linear seismic vulnerability analyses. Moreover, features of the model can be estimated from a few structural data and it does not require to perform expensive cyclic experimental tests. For a deeper understanding of the effects of pinching in the seismic response and to highlight the potentiality of the proposed model a case-study example is also considered. The case-study concerns a rack system, whose beam-to-column joints are modelled using two numerical approaches which differ in the deterioration of the rotational stiffness of joints. Non-linear dynamic analyses, with simulated ground acceleration time-histories, have been carried. 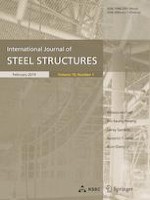