When sampling minimal subsets for robust parameter estimation, it is commonly known that obtaining an all-inlier minimal subset is not sufficient; the points therein should also have a large spatial extent. This paper investigates a theoretical basis behind this principle, based on a little known result which expresses the least squares regression as a weighted linear combination of all possible minimal subset estimates. It turns out that the weight of a minimal subset estimate is directly related to the span of the associated points. We then derive an analogous result for total least squares which, unlike ordinary least squares, corrects for errors in both dependent and independent variables. We establish the relevance of our result to computer vision by relating total least squares to geometric estimation techniques. As practical contributions, we elaborate why naive distance-based sampling fails as a strategy to maximise the span of all-inlier minimal subsets produced. In addition we propose a novel method which, unlike previous methods, can consciously target all-inlier minimal subsets with large spans. 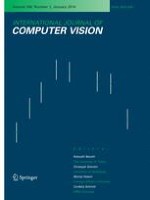 Erratum to: Learning Vocabularies over a Fine Quantization

A Comprehensive Survey to Face Hallucination