The broadcast storm problem causes redundancy, contention and collision of messages in a network, particularly in vehicular ad hoc networks (VANETs) where number of participants can grow arbitrarily. This paper presents a solution to this problem in which a node is designated as a master through an election process. Moreover, an algorithm is proposed for asynchronous VANETs to select a master node, where the participants (i.e., vehicles) can communicate with each other directly (single-hop). The proposed algorithm is extrema-finding in a way that a node having maximum signal strength is elected as a master node and each vehicle continues communication with the master until the master node keeps its signal strength at the highest level and remains operational too. This paper further presents the Petri net-based modeling of the proposed algorithm for evaluation which is going to be presented for the first time in leader election algorithm in VANETs. Verification of the proposed algorithm is carried out through state space analysis technique. 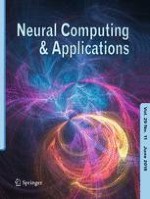 Classification model of restricted Boltzmann machine based on reconstruction error