It is likely that in surging glaciers so-called selected dynamic states occur in a zone extending from the surge front upwards to a cross section in the region of extreme velocity. Selected dynamic states of glacier zones are determined mathematically by requirements for the three external longitudinal forces, which are exerted on its lower bounding plane (the front), its base and its upper bounding plane (the rear). In this paper, ‘base’ denotes the whole area of contact with the ground. Such selected dynamic states are analysed. Quasi-hydrostatic forces are defined mathematically as ‘natural’ reference forces, and the forces in the considered state are described by their fractional changes with respect to these reference forces. These fractional changes are the ‘dimensionless dynamic quantities’ of the front, of the base, and of the rear, but the latter quantity is zero due to the requirements mentioned above. A dynamic–geometric relation between the dynamic quantity of the front and a dimensionless geometric quantity of the glacier zone is established, and consequently, a critical length is introduced, which must be exceeded by the length of the zone for it to exist. Finally, a method of calculation of the dimensionless dynamic and geometric quantities from data of strain rates, temperatures and geometry is developed. 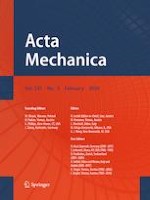