In this study a Wenchuan earthquake-induced landslide susceptibility assessment was carried out in the Longnan area in northwestern China using a GIS-based logistic regression model. This region has frequently been affected by landslides in the past, and was intensively affected by the 5.12 Wenchuan earthquake which received considerable international attention. The data used for this study consist of the landslides triggered by the Wenchuan earthquake and a landslide pre-disposing factor database. Information regarding the landslide causative factors came from additional data sources, such as a digital elevation model (DEM) with a 30 × 30 m2 resolution, orthophotos, geological and land-use maps, precipitation records, and information on peak ground acceleration data from the 2008 earthquake. The statistical analysis of the relationship between the Wenchuan earthquake-triggered landslides and pre-disposing factors showed the great influence of lithological and topographical conditions on slope failures. The quality of susceptibility mapping was validated by splitting the study area into training and validation sections. The prediction capability analysis demonstrated that the landslide susceptibility map could be used for land planning as well as emergency planning by local authorities. 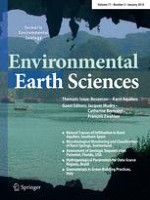