The influence of environmental factors on childhood fever during the rainy season in an African city: a multilevel approach in Dakar, Senegal | springerprofessional.de Skip to main content
TOOLBAR 1 2 3 4
SUCHE MENÜ 1 2 3 4

In African growing cities, vector-borne diseases (such as malaria and dengue) contribute to a large burden of childhood morbidity and mortality. During the peak of transmission, environmental factors can have an influence on those fevers, apart from the individual and household characteristics. A household survey conducted in 2008 in Dakar was completed by a community questionnaire on environmental threats that could be factored into multilevel analyses. Using a randomized sample of 7,300 children from 3,000 households dispatched within 50 neighborhoods, a three-level modeling process is presented. Rates of recent fever varied substantially from one neighborhood to another, ranging between 10 and 37 %. Findings indicate that the onset of fever is influenced by factors from all three hierarchical levels, with neighborhood factors playing a relatively lower role than the other two. Among the environmental factors, the effect of environmental sanitation is particularly interesting. 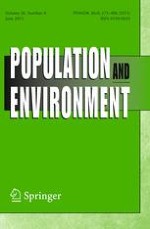 Now there is no land: a story of ethnic migration in a protected area landscape in western Uganda

Can glacial retreat lead to migration? A critical discussion of the impact of glacier shrinkage upon population mobility in the Bolivian Andes