Femtocells are aimed at providing strong coverage in the indoor area where typical macrocell coverage is very poor. It has hugely attracted network operators and stakeholders mainly due to its simple plug and play operation and low cost. Femtocells operate on a much lower power compared to macrocell and thus provide a number of benefits including energy efficiency and frequent spatial reuse of the spectrum. Femtocells are overlaid on macrocells and designed to co-exist with them sharing the same spectrum pool. However, since they are deployed by the end user, no pre-deployment resource planning is possible. So, interference among the femtocells as well as between femtocells and macrocells remain a major bottleneck for successful operation of femtocell networks. This paper proposes a novel threshold power based admittance and contention free resource allocation for interference mitigation in cognitive femtocell networks. In our proposed scheme, a Femtocell Access Point with Cognitive radio capability known as Cognitive Femtocells (CF), sets a threshold value on the mutual interference between itself and a close by macrocell user equipment (MUE). To mitigate cross-tier interference, a CF classifies MUEs with higher than threshold interference value as Undesirable MUEs (UMUEs) and subsequently admits it as one of its user equipment. MUEs with lower than threshold interference values are classified as Desirable MUEs (DMUEs). To mitigate co-tier interference, proposed scheme introduces a scheduling engine which employs matching policy attributes and assigns resource blocks (RBs) of unique DMUEs to CFs to avoid any possible contention problems, thus providing improved co-tier interference. System level simulations have been performed to demonstrate effectiveness of scheme and significant performance improvement in terms of SINR, throughput and spectrum efficiency. 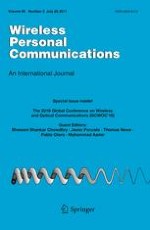 Topology Update Based on Compressed Sensing in WMNs