The Standardized Precipitation Index (SPI) is a well-established drought index that is based on transforming the interannual distribution of precipitation to a standard normal distribution. Because of its robust statistical basis, SPI is readily applicable to different regions making comparisons between locations and time windows possible. Nevertheless, the usability of SPI results is undermined by shortcomings that are partly resultant from data and model uncertainties. One such shortcoming is the inability of the existing SPI model to include change in variability of interannual precipitation from non-stationary normal – mostly caused by climate change. In addition, epistemic uncertainty in the form of incompleteness in station-wide precipitation records results in heterogeneity and inconsistency in SPI results. The effects of such epistemic uncertainty on the accuracy of estimations of long-term changes in drought frequency are mostly unknown. Given such deficiency, SPI’s procedure and subsequent results remain deterministic and inadequately informative. Here, we introduce modifications to the traditional SPI using Dempster-Shafer theory (DST) to enable modeling and propagation of variability and epistemic uncertainty with the regular SPI procedure. By generalizing the SPI model from a deterministic setting to an “uncertainty-driven setting” provided by DST, this work makes possible: (a) efficiently propagating data uncertainty in interpolation of station-wide precipitation and SPI, and (b) modeling the effects of shift in precipitation normals (due to e.g., climate change) on drought frequency. In addition, the significance of this shift may then be evaluated with respect to the epistemic uncertainty by measuring how much of the surrounding epistemic uncertainty this shift encloses (i.e., “probability of enclosing”). The latter is especially important due to large unknowns already associated with climate change modeling. We implement the model on summer extreme drought for the Okanagan Basin, BC, Canada. For a single general circulation model and scenario (CGCM3 A2) a maximum 7 % increase in summer extreme drought (for 2080s, as per current definition) is estimated with a maximum probability of enclosing of 36 %. 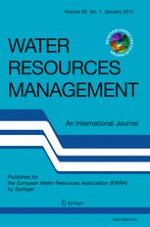