Accurate forecasting of rainfall is important in the effective management of water resources, particularly in arid regions. The wavelet analysis-support vector machine coupled model (WA-SVM) was evaluated for 1, 3 and 6 months ahead rainfall forecasting. The coupled model was obtained by combining the discrete wavelet transform (DWT) and support vector machine (SVM) methods. Monthly rainfall data from the Qilian, Yeniugou and Tuole stations in Qilian Mountains, China were used to optimize the model. By comparing the model output with the observed data on the basis of the coefficient of correlation (R), root mean squared error (RMSE), mean absolute error (MAE) and Nash-Sutcliffe efficiency coefficient (NS), it was found that the performances of WA-SVM models for 1, 3 and 6-month ahead rainfall forecasting were good, and the models have forecasted the rainfall values with reasonable accuracy in all the statistical indices during testing period. Relative to the performance of regular SVM models, we show that the WA-SVM model demonstrates superior accuracy among the SVM models in forecasting rainfall at all tested lead times, probably due to a wavelet transform effect on the SVM predictive ability. The WA-SVM model was also compared with conventional ANN models, and the WA-SVM model was found to be significantly superior. The results of the study indicate that the WA-SVM model is preferable and can be applied successfully because it provides high accuracy and reliability for multi-time ahead monthly rainfall forecasting. 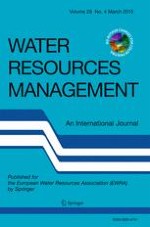