Interval multi-attribute decision making (I-MADM) is a topic of current interest. Various methods have been proposed to address I-MADM problem. However, applying these methods is becoming increasingly difficult because the behavioural characteristics of the decision maker are often neglected. In this paper, a novel interval TODIM (I-TODIM) method, in which two behavioural characteristics (i.e., reference dependence and loss aversion) of the decision maker are considered, is proposed to address the I-MADM problem. The proposed I-TODIM method is comprised of three modules. First, while considering the reference dependence behaviour of the decision maker, the relative gain and loss degrees of each alternative for each attribute are calculated. Next, the relative perceived dominance degree of each alternative for each attribute is computed based on the loss aversion behaviour of the decision maker. After calculating the overall perceived dominance degree of each alternative, the ranking results of the alternatives can be obtained. Finally, an example, a comparison and a simulation analysis are given to illustrate the feasibility and validity of the proposed method. 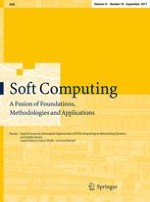 A currency exchange rate model with jumps in uncertain environment