Japan and the European Union (EU) both have well-established End-of-Life Vehicle (ELV) policies and management systems. However, due to the differences in these policies and management systems, the flows and indicators reflecting the performance of ELV management are not directly comparable. Hence, the study aims to understand the ELV flows of Japan and the EU, and quantitatively compare its management performances. This study uses material flow analysis to compare the ELV material flows of Japan and the EU. It quantifies the reuse, material recycling, energy recovery, and contributions of the different operations processes. Overall, it was estimated that Japan had the reuse and recycling rate of 83.7% and reuse, recycling and recovery rate of 99.5% for the year 2017, while the corresponding percentages for the EU for 2017 were 88.5% and 95.6%, respectively. Vehicles with unknown whereabouts are found to be significantly higher for the EU, while the used vehicle export fraction is significantly higher for Japan. Performance of automotive shredder residue treatment was also compared, and it was found that the EU had a lower energy recovery rate but a higher material recycling rate than Japan. Exports from ELV treatment were also studied and found to be higher for Japan. 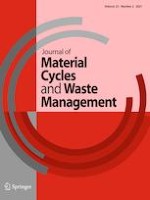 Optimization of microwave treatment for dewaterability enhancement of electroplating sludge

Performance of mortars with PET