Weather parameters are the dominant factors determining the distribution and abundance of most insect species. Oscinella frit, (Diptera: Chloropidae) is a stem-borer which can cause considerable damage to cereals that sown in spring. Weather parameters are dominant factors determining the distribution and abundance of many insect species including O. frit. Spring wheat in is susceptible to frit fly infestation during a limited period at early growth stages in central Germany. Fluctuations in the population of a pest during the year produce concomitant variations in damage. Life cycle of frit fly is ca. 20–60 days, eggs are laid one or in groups (1–15 eggs) behind sheath of first leaf, fecundity reaches 25–30 eggs, and embryonic development lasts (4–10 days) Lindblad and Sigvald ( 1996). Larvae hatch (three instars) and feed by tunnelling in stems to crown near soil surface. The larvae of older instars feed on tissues of growing- points. The larvae period lasts 13–20 days (Volkmar and Wetzel 1984; Lindblad and Sigvald 1996). Tillers attacked by frit fly show the classic ‘dead heart’ symptoms of a yellow central leaf which can be easily pulled away from the surrounding green leaves. Frit fly maggots attack the young plants (1–4 leaves) this leads to plant loss and in severe attacks whole crops have had to be re-drilled where control measures have not been used. The maggots are able to survive in the decaying plant debris and can migrate to feed on the newly sown crop (Lindblad 1999).
The insect opportunities to exploit plants during these periods are affected by weather conditions in several ways (Kingsolver 1989). The synchronization between insect and plant phenologies varies due to weather variation. Furthermore, weather conditions during the susceptible period of the host plant directly influence infestation rates, by e.g. affecting the insect oviposition rate or mortality (Bentley and Clements 1989; El-Wakeil et al. 2009).
Anzeige
Coloured water traps are often used to sample flying insects. Insects are attracted visually by the colour of the traps and are then captured in the water in them. Studies have demonstrated the preferences of a variety of insect groups for particular trap colours (Finch 1992; Barker et al. 1997). Previous studies using coloured traps to collect adult frit flies have looked at colour preferences and support the use of blue traps Lindblad and Sigvald ( 1996).
The objectives of this work were to assess the role of some weather conditions (temperature, rainfall and solar radiation) on frit fly population in spring wheat fields, its infestation levels and the response of frit fly catches to different coloured water traps.

Three colour water traps (blue, white and yellow) were used to sample adult flies in spring wheat plots. The traps consisted of metallic dishes; 25 cm diameter and 6.5 cm deep fixed in the ground and were partly filled with water with a small quantity of detergent as described by Lindblad and Sigvald ( 1996). The traps were observed two times weekly and trapped flies were counted under binocular in the laboratory.
Anzeige

Infestation percents data was arcsine square-root transformed. The difference among treatments was analyzed by Generalized Linear Model ((GLM), ANOVA-repeated measures) using Statistix 9 program (Thomas and Maurice 2008) and following with Tukey test to compare means of varieties. Significant differences were observed at P < 0.05 for all trials.

Trap catch were recorded in two peaks on 4 th and 11 th May 2009 (GS 17 and 21). On 4 th May, the caught flies reached to 56, 49 and 34 flies/trap in blue, white and yellow traps, respectively; while on 11 th May, the fly numbers reached to 18, 39 and 16 flies/ trap in blue, white and yellow traps, respectively. The highest flies were recorded in blue traps (56 flies/trap) on 4 th May, while in the white traps reached to 39 flies/trap on 11 th May. Then, those numbers declined daily until end of May (Fig.  1b). Total frit fly catches were 221, 229 and 153 flies in different traps (blue, white and yellow), respectively; which were differed significantly (P = 0.0381) among trap colours. The peaks correlated with weather condition parameters (temperature, rainfall and solar global radiation/cm 2) (Fig.  2a– c), and also coincided with growth stages of wheat seedlings for oviposition.

The highest trap catches in the different water traps were recorded on 10 th May 2010 (GS 17). The frit fly numbers reached to 30, 103 and 95 flies in blue, white and yellow traps, respectively. These catch numbers declined gradually until end of May. Total trap catches were significantly differed (P = 0.0242) among trap colours, the highest numbers were recorded in white traps (398 flies) followed by yellow traps (356 flies) and lastly came blue traps (117) (Fig.  1c). The fly numbers were correlated with suitability wheat seedlings for oviposition and also with mean of solar global radiation, temperature and rainfall (Fig.  2a– c).

Generally, analyses of variance of infestation percents data showed significantly differences between wheat varieties (P = 0.0001) as well among the studied years (P = 0.001). Season effects may be due to the different weather conditions among years.

There were significant differences among trap catches in the three season-studies. The flies caught in water traps were recorded in two peaks in 2008 and 2009; while one peak was recorded in 2010. The results are consistent with previous findings by El-Wakeil et al. ( 2009). The high numbers were related to weather conditions as reported by Lindblad and Sigvald ( 1999), who stated that trap catches and infestation rates of frit fly in oats plants were related to daily weather conditions as well as plant growth stages. Similarly, Menéndez ( 2007) mentioned that climate changes affect biological and ecological systems of insects; as well Rygg ( 1966) and Barker et al. ( 1997) indicated that majority of flies caught in water traps were caught in early of May which had developed eggs. Trap catches were significantly differed among traps (blue, white and yellow) and also frit fly catches were correlated with solar global radiation. There was a positive correlation between blue trap catches and solar radiation and negative correlation with white and yellow traps in different studied years.
Our results show in agreement with Cuncliffe et al. ( 1925), that wheat seedlings were most susceptible to frit fly infestation during growth stages GS 11–13. Thereafter, the susceptibility rapidly decreased. Seedlings in GS 17 were considerably less susceptible than in earlier stages. However, we found that up to 30% of the main shoots may be infested in this growth stage if the infestation pressure is high. Hence, the risk of frit fly damage cannot be neglected until the spring wheat has reached GS 19–21. Spring wheat seedlings tended to be less infested in GS 10 than in the following stages (Fig.  3). This finding supports the hypothesis that very young plants are less attractive to the egg-laying female as confirmed by Jonasson ( 1977), but may also be due to a shorter exposure time.
Temperature and solar global radiation affected trap catches and infestation rates, whereas rainfall was less important. Few plants were infested during days with maximum temperatures lower than 12–13°C (Tab.  1 and Fig.  3). Our results are comparable with previous findings from studies of damage on autumn-sown cereals; where Riggert ( 1935) stated that egg-laying ceases at maximum temperatures below 15°C and that wind and rain normally do not affect infestation rate. Since spring wheat seedlings mainly are susceptible to infestation during GS 11–13, daily temperatures during these growth stages will highly influence the risk of frit fly infestation. The relationship between the development rate of spring wheat and temperature is approximately linear as mentioned by Saarikko and Carter ( 1996); Lindblad and Solbreck ( 1998) and the duration of these growth stages depends on weather conditions.
Triso had more infested tillers than Sakha 93 in 2008 and vice versa in 2009 and 2010 (infestation was in Sakha 93 higher than Triso variety in 2009 and 2010). This may be due to one variety grows faster than the other variety with respect to different weather conditions. Generally, infestation percents were higher in season 2008 and 2009 than 2010; this may be due to weather condition parameters which affected on frit fly activities (hibernation- frit fly emergence, egg oviposition and larval activity) as declared by Lindblad ( 1999). Frit fly adults has a good chance to lay their egg till GS 13, commonly occurs in early of season as confirmed by Southwood et al. ( 1961) and Tolley and Niemzcyk ( 1988); while plants are still young. Larval activity stopped at GS 19–21 then declined till GS 31–33.
Early spring wheat will escape in most cases from frit fly infestation even if the weather is warm during the most susceptible growth stages, because the flies have not yet emerged. The time of frit fly emergence can be predicted with relatively high accuracy, although forecasting errors may arise due to e.g. choice of weather station within a region as reported by Jonasson ( 1977); Clements et al. ( 1990); Lindblad and Sigvald ( 1996, 1999). However, our study shows that although significant damage of seedlings in GS 17–19 is uncommon, it cannot be totally excluded. In years with high abundance of frit flies and warm weather, early-sown crops may suffer unexpected damage due to infestation in this growth stage. Hence, to explain the incidence of frit fly damage, it is necessary to consider not only the timing between insect and crop phenologies, but also the influence of weather conditions at trap catches, oviposition, larval infestation and variation in population size between years. In conclusion, there were two stages; firstly, frit fly-overwinter-emergence which affected by rainfall and solar radiation and secondly, fly infestation that affected by temperature. Climate is the dominant factor determining the distribution and abundance of most insect species. 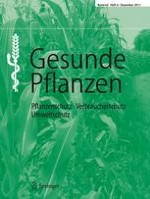