To investigate the effect of hydrophobicity on the charge reversal of colloidal particles, we measured and analyzed the electrophoretic mobility (EPM) of carboxyl latex particles in mixed electrolytes solutions containing potassium chloride KCl and tetraphenylphosphonium chloride TPPCl. Tetraphenylphosphonium (TPP+) ion strongly adsorbs on the particle surface due to its hydrophobicity and thus causes the charge reversal/overcharging. Measurements of EPM were carried out as functions of pH, ionic strength, and the mixed molar ratio of X = [TPP+]/[K+] to unveil the influence of surface charge on hydrophobic interaction. Experimental EPM was analyzed by using 1-pK H Stern Gouy Chapmann model with the Ohshima equation including the relaxation effect or the Smoluchowski equation neglecting the relaxation effect for calculating theoretical EPM values. Our results demonstrate that carboxyl latex particles show charge reversal indicated by positive EPMs at low pH due to the accumulation of TPP+ ions on the surface and the reversed EPM values at low pH are augmented with increasing the mixed molar ratio of X = [TPP+]/[K+]. Also, we observed that charge re-reversal at higher pH as the deprotonation of surface carboxyl groups proceeded. The pH at which the charge re-reversal occurred increased with increasing the mixed molar ratio. From the comparison between our experiments and theoretical analysis, we found that the intrinsic energy of adsorption decreases with increasing the surface charge density to describe the observed charge re-reversal. These results indicate that the intrinsic adsorption energy of TPP+, which is probably due to hydrophobic interaction, decreases with increasing the surface charge density. 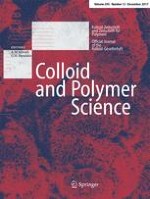 Synthesis, characterization, and physicochemical properties of a series of quaternary gemini surfactants with different spacer lengths