Structured complex silicon components have been widely used in solar cells, biomedical engineering and other industrial applications. As silicon is a typical brittle material, ultrasonic vibration cutting (UVC) is a promising method to achieve better cutting performance than conventional techniques. High-frequency 1D UVC possesses higher nominal cutting speed and material removal rate than many 2D/3D UVC systems, and thus, it has great development potential in industrial applications of structured silicon components. However, few researchers have applied 1D UVC to the cutting of structured silicon surfaces, since its main drawback is tool marks imprinted by the vibration on machined surface. In this study, to uncover the key machining characteristics under the condition of 1D UVC, a series of tests involving diamond cutting grooves were first performed on the silicon surface. The machined surface and chips were subsequently measured and analyzed to evaluate the critical undeformed chip thickness, surface characteristics, and chip formation. Regarding the main drawback of 1D UVC, a novel theoretical model was developed for predicting the length of tool marks and evaluating the impact of tool marks on the surface finish. The results demonstrated that the critical undeformed chip thickness of silicon reached 1 030 nm under a certain vibration amplitude and that an array of micro grooves was generated at the plastic region with a surface roughness (Ra) as low as 1.11 nm. Moreover, the micro topography of the continuous chips exhibited discontinuous clusters of lines with diameters of dozens of nanometers, only composed of polysilicon. The novel theoretical model was able to predict the length of tool marks with low error. Thus, the impact of tool marks on the surface finish can be reduced and even eliminated with help of the model.
Anzeige
Vorheriger Artikel Variation characteristic of drilling force and influence of cutting parameter of SiCp/Al composite thin-walled workpiece
Nächster Artikel Bio-inspired motion planning for reaching movement of a manipulator based on intrinsic tau jerk guidance 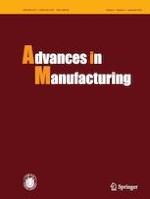 Surface reconstruction from unorganized point clouds based on edge growing