In this paper, microstructure evolution and failure analysis of the aluminum-copper interface of cathode conductive heads during their use were studied. The interface morphologies, compositions, conductivity and mechanical properties were investigated and analyzed. Obvious corrosion was found on the surface of the contact interface, which was more prevalent on an Al matrix. The crack increased sharply in the local metallurgical bonding areas on the interface, with the compound volume having no significant change. The phase transformation occurred on the interface during use, which was investigated using the elemental composition and x-ray diffraction pattern. The microhardness near the interface increased accordingly. An obvious electrical conductivity decrease appeared on the Al/Cu interface of the cathode conductive head after use over a specific time interval. Therefore, the deterioration of the microstructures and corrosion are the primary factors that affect the electrical conductivity and effective bonding, which will lead to eventual failure. 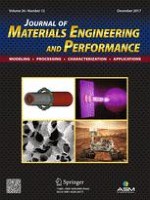