In this article, we shift the usual analytical attention of the GPN framework from lead firms to suppliers in the network and from production to IT services. Our focus is on how Indian IT suppliers embed in the Netherlands along the threefold characterization of societal, territorial and network embeddedness. We argue that Indian IT suppliers attempt to display societal embeddedness when they move to The Netherlands. Our findings reveal that the endeavour by Indian IT suppliers to territorially dis-embed from the Dutch context is reinforced by their peripheral position in the network and their ability to offshore work in a bid to contain costs, in addition to the influence of client domination. Therefore, territorial embeddedness is considered to be secondary to societal embeddedness which is intertwined with client interest while neglecting the interest of other network members. Nonetheless, the inter-firm relationship is complex, given the tension between societal, territorial and network embeddedness. While preferring Indian IT suppliers because of their low pricing, Dutch clients also insist on compliance with the institutional context of the Netherlands especially when it comes to Dutch employees. This results in hybridization which means that Indian IT suppliers find ways to adhere to the institutional framework for Dutch nationals while simultaneously insulating Indian employees from the same. Consequently, a highly unfair segmented internal labour market develops, with Dutch nationals being treated more favourably as compared to Indian nationals. Nonetheless, to address these violations, Indian employees prefer individual strategies of resilience and rework rather than a collectivization response. 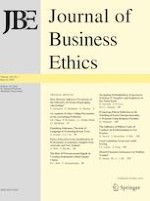 Does Humour Influence Perceptions of the Ethicality of Female-Disparaging Advertising?

Should Financial Gatekeepers be Publicly Traded?