With the thriving of different natural interaction paradigms—such as gesture-based interfaces—it becomes important to understand how these novel interfaces can influence users’ performance when it comes to their age. Recent advances made in human–computer interaction allow us to manipulate digital contents more intuitively; however, no work has yet been reported that systematically evaluates how gestural interfaces may influence the performance of different user groups. Different optical sensors, which allow human body acquisition with reliable accuracy, have been released, and with the appearance of such controllers for gesture recognition, it becomes important to understand if different age-related groups display similar performance levels concerning gestural interaction, or, on the other hand, if specific sensors could induce better results than others when dealing with users of different age brackets. In this article, we compare two gesture-sensing devices (Microsoft Kinect and Leap Motion) using the Fitts’ law model to evaluate target acquisition performance, with relation to three user groups: children, young adults and older adults. This case study involved 60 participants that were asked to perform a simple continuous selection task as quickly and accurately as possible using one of the devices for gestural recognition. Indeed, performance results showed statistically significant differences among the age groups in the selection task accomplished. However, when considering the users’ performance with regard to both input devices compared side by side, there were no significant differences in each group of users. We believe this situation could imply that the device itself might not have influenced the users’ performance, but actually the users’ age might. The participants feedback was interesting on account of their behaviors and preferences: Although there are no significant differences in performance, there could be when it comes to user preference. 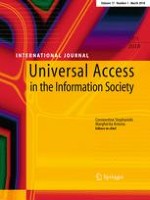 A human–computer interaction approach for healthcare