The Salafi movement presents itself as a moral guardian of Muslims in a world that, according to many, is filled with moral crisis, temptations and anti-Islam tendencies. Salafis claim that it is essential to return to the community of the pious forefathers seen as the most outstanding community of all times with the highest absolute moral standard. In this article I will show how individual participants engage with this idea of a moral community of believers yet remain vulnerable to the ambiguities and ruptures inherent in everyday life and within the Salafi movement. By exploring how Salafis passionately try to search for the ‘correct’ knowledge and strive to maintain a unity between knowledge, conviction and behavior, and the role of friendships therein, I argue that Salafism does not remain separate from the troubles of everyday but that these issues enter into and exist in Salafi thought and practice, not by being resolved but by being transformed into personal struggles. These ambiguities and ruptures may cause problems but also provide an incentive for Salafis to continuously work at the self-improvement of one’s piety, authenticity, and sisterhood and brotherhood.

Titel
The moral maze: Dutch Salafis and the construction of a moral community of the faithful
Autor:
Martijn de Koning 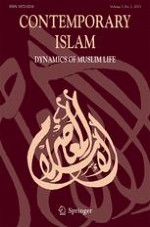 What makes a good minority Muslim? Educational policy and the paradoxes of Muslim schooling in Uganda

The clash of values across symbolic boundaries: claims of urban space in contemporary Istanbul

Piety, profit and the market in Cairo: a political economy of Islamisation

Hand, heart and handphone: State shari`a in the age of the SMS