Despite the fact that business people and business students often cast doubt on the relevance of universal moral principles in business, the rejection of relativism is a precondition for business ethics to get off the ground. This paper proposes an educational strategy to overcome the philosophical confusions about relativism in which business people and students are often trapped. First, the paper provides some conceptual distinctions and clarifications related to moral relativism, particularism, and virtue ethics. More particularly, it revisits arguments demonstrating that virtues in business are not in contradiction with the relevance of universal principles, despite the fact that virtue ethics is often identified with particular relationships and contexts. It goes on to show how students and managers, but also researchers, often mix up radically different conceptions of moral relativism. It is also argued that this confusion is in part created by the cross-cultural management literature in which the methodological stance of the value-freedom of the social sciences is, in a perplexingly mistaken way, transformed into a rejection of all normative discussion and a plea for relativism. The remainder of the paper presents some tools that may be helpful in steering people toward less simplistic views about moral relativism and virtue ethics. It further argues that it is equally important to spell out that moral universalism can be understood in a humble way, without implying either arrogant ethnocentrism or omniscience, as part of an ongoing debate that progresses gradually. 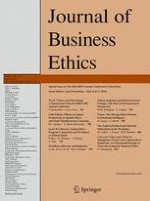 Work, Virtues, and Flourishing: A Special Issue from the EBEN 25th Annual Conference

The Neglected Ethical and Spiritual Motivations in the Workplace