The discharge of a lower-order stream empties into a higher-order stream. The higher-order flow is therefore influenced by the lower-order flow and this may be useful in predicting discharge in the tributary stream. The study is focused on fitting composite rating curve to stage of the higher-order stream and discharge of the lower-order stream. Available 1985 to 1988 stage and discharge data of Rivers Otamiri (higher-order stream) and Oramiriukwa (lower-order tributary stream) in Imo state, Nigeria, were used in the study. Curves are fitted to the data and the error of estimate, the coefficient of determination, R2% and F-test were used to judge the overall significance of the fitted models. The study revealed that the quadratic and power curves are clearly good representatives of the stage-discharge relationship in Otamiri River. The polynomial curve slightly represents the data better than the power curve in the case of Oramiriukwa River. It was revealed that Otamiri River was not in regime between 1985 and 1986. Only 1988 rating curve can be used to estimate flow in the river. The composite rating curve has a cubic function, S = 0.187Q + 0.027Q2 + 0.002Q3+0.726, in 1987 that best represents the stage-discharge relationship. This is because the correlation analysis indicates a 0.999 positive correlation coefficient and 99.9% of explained variance at the least standard error of 0.005. The statistical analysis demonstrate that the proposed methodology can be confidently used for rating curve development and discharge estimation at other (ungauged) sites, thus avoiding the manual discharge measurement at any river site not subjected to backwater effects.

Titel
Use of Lower-Order and Higher–Order Streams in Modelling the Rating Curve
Autor:
A. O. Ibeje 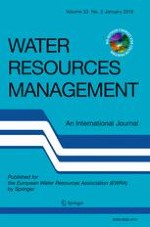 Price and Behavioural Signals to Encourage Household Water Conservation: Implications for the UK