An anti-sticking patterned metallic stamp for imprinting has been successfully fabricated in this study. Firstly, the amorphous phase transformation films of Ge2Sb2Te5 (GST) were deposited on the cleaned silicon substrates by DC sputtering system. The as-deposited GST film was then irradiated with femtosecond laser pulse through a photomask to induce the crystalline mark on the surface. The patterns were well-defined while the thermal diffusion length of the irradiated GST film was less than 1 nm. Due to the fact that the chemical properties between the amorphous region and crystalline mark were varied, the crystalline mark was etched by using nitric acid mixed with ethanol, and consequently a μm-patterned GST stamp was fabricated. For the purpose of reducing patterned GST stamp’s surface roughness to under Ra 5 nm, and for the fact that the bottom of the trench was fairly flat, the optimized processing parameters which use Taguchi methods were found to be within the irradiation time of 1 min, in the concentration of etching of 25 vol%, and etching time of 1 min. Owing to the patterned GST stamp has low surface energy than the patterned silicon stamp thus the SU-8 polymeric patterns were more successfully replicated and easily demolded. 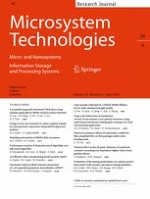 Vibration analysis of FG nanobeams on the basis of fractional nonlocal model: a variational approach