» Zur Zusammenfassung PDF-Version jetzt herunterladen
Wichtige Hinweise
Communicated by A. Di Nola.
The original version of this article was revised: The article On \(\varepsilon \)-soft topological semigroups, written by A. A. Bahredar and N. Kouhestani, was originally published electronically on the publisher’s internet portal (currently SpringerLink) on 10 March 2020 with open access. With the author(s)’ decision to step back from Open Choice, the copyright of the article changed on 22 April 2020 to ©Springer-Verlag GmbH Germany, part of Springer Nature 2020 and the article is forthwith distributed under the terms of copyright.
The original version of this article was revised: Due to Open Choice cancellation.
A correction to this article is available online at https://​doi.​org/​10.​1007/​s00500-020-04970-0.

5 Conclusion and suggestions for future work

The authors would like to express their sincere gratitude to the referees for their valuable suggestions and comments.

The authors declare that they have not conflict of interest.

This article does not contain any studies with human participants performed by any of the authors.

This article does not contain any studies with animals performed by any of the authors. 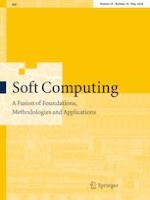