Silver (Ag) films were deposited on glass substrates by radio frequency (RF) magnetron sputtering and then ablated by a 532 nm nanosecond pulsed laser. The effects of laser fluence and defocusing amount on the width and depth of laser-ablated grooves on 100- and 600-nm-thick Ag films were systematically investigated under single- and multi-scan ablation. The results suggested that the Ag films could be successfully removed from the substrate owing to laser-induced thermoelastic force or vaporization. It was confirmed that laser fluence and defocusing amount played very important roles in controlling the width and depth of the laser-ablated grooves. In the present work, grooves with widths ranging from 53 to 196 μm and depths ranging from 56 to 196 nm were obtained on 100-nm-thick Ag films by single-scan laser ablation, and laser ablation or removal with controllable depths was realized on 600-nm-thick Ag films by adopting single- or multi-scan (i.e., scanning numbers of 1–6). Furthermore, square spiral Ag patterns were successfully obtained by single- and multi-scan laser ablation and showed good electrical conductivity in a simple circuit. This work may have great potential applications in various fields that demand width and depth control of laser ablation/removal. 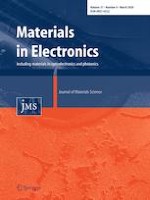 Growth of PbBr2 microrods with unique structure and surface morphology