Marketing’s evolution toward a new dominant logic requires the focus of marketing to be on the intangible, dynamic, operant resources that are at the heart of competitive advantage and performance. First, building on resource-advantage theory’s notion of basic resources and higher-order resources, this article proposes a hierarchy of basic, composite, and interconnected operant resources. Second, reviewing research on business strategy and marketing strategy, several resources that correspond to the proposed hierarchy are identified and discussed. Third, the notion of developing masterful operant resources is introduced. Fourth, based on the proposed hierarchy and the notion of masterful operant resources, some exemplars of potential research avenues for marketing strategy are provided. Finally, the article concludes with the discussion of implications for marketing practitioners, researchers, and educators. In sum, this article extends and elaborates the concept of operant resources in the service-dominant logic of marketing. 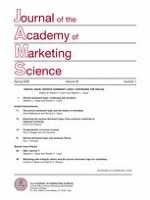 Managing the co-creation of value

Trying to prosume: toward a theory of consumers as co-creators of value

The effects of customer participation in co-created service recovery

The service-dominant logic and the future of marketing