Utilization of reversible non-covalent interactions is a versatile design strategy for the development of stimuli responsive soft materials. In this study, hydrophobic interactions were harnessed to assemble water-soluble macromolecules and nanoparticles into a transient hybrid network forming thermosensitive hydrogels with tunable rheological properties. Hybrid hydrogels were built of biopolymer derived components: cellulose nanocrystals (CNCs), nanoparticles of high aspect ratio, and hydroxypropyl methylcellulose (HPMC). To enable polymer/CNC assembly via hydrophobic interactions, the surface of highly hydrophilic CNCs was modified by binding octyl moieties (octyl-CNCs). The amphiphilicity of octyl-CNCs was confirmed by surface tension measurements. The molecular and particulate amphiphiles assemble into hybrid networks, which result in stiffer and stronger hydrogels compared to HPMC hydrogels and hydrogels reinforced with hydrophilic CNCs. Hybrid hydrogels retain the ability of HPMC hydrogels to flow under applied shear stress. However, significantly higher viscosity was achieved for HPMC/octyl-CNCs compared with HPMC/CNCs hydrogels. The inherent thermal response of rheological properties of HPMC hydrogels was further amplified in combination with octyl-CNCs due to temperature-induced polymer/nanoparticle association via hydrophobic interactions. Saturation transfer difference NMR spectroscopy demonstrated the growth of network-bound water with an increase in temperature, which correlates with the increase of stiffness and viscosity of hydrogels upon heating. Rheological properties of these hybrid hydrogels are defined by the content of the soluble polymer and the CNCs, and it is shown that they can be finely adjusted for a required application. 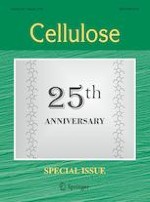 Yellowing and brightness reversion of celluloses: CO or COOH, who is the culprit?