This paper reports an efficient process for the room-temperature production of Bi/BiOBr composites. For this purpose, BiOBr was prepared via a solid state synthesis, while metallic bismuth nanoparticles were loaded onto the surface of BiOBr via a chemical reduction process in NaBH4 aqueous solution. Subsequently, both pristine BiOBr and Bi/BiOBr composites were characterized, and their photocatalytic efficiency was evaluated by degrading aqueous ciprofloxacin (CIP) solution (100 mL, 20 ppm), placed at approximately 2.5 m away from a 25 W indoor fluorescent light source. During the photocatalytic degradation process, Bi/BiOBr-20 showed a superior performance as its degradation efficiency reached 94.8% within 60 min, while 85.8% of the total organic carbon (TOC) has been removed after 120 min. Such enhanced performance has been attributed to the efficient separation of the photogenerated charge carriers and strong light absorption by Bi/BiOBr-20 composite photocatalyst. Results from active species studies were used in proposing a possible mechanism for the photodegradation process. The reusability study revealed negligible loss in the performance of Bi/BiOBr-20 composite photocatalyst over the five cycles investigated. Such facile room-temperature production process presented herein, could be useful in the design and large scale production of other bismuth-based photocatalysts. 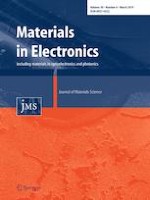 Enhancing the photovoltaic characteristics of organic solar cells by introducing highly conductive graphene as a conductive platform for a PEDOT:PSS anode interfacial layer