Figure  1 shows the experimental system. The physiological indices were FTI and mean arterial pressure (MAP). The experimental system comprised an infrared thermography device (A35 Series; FLIR Co.) and a non-invasive continuous blood pressure monitor (CNAP Monitor HD, CNSystems Co.). The infrared thermography device was set up approximately 1.0 m in front of the subject. The thermal images were captured at a sampling frequency of 1 Hz. The size of the thermal image was \(320 \times 256\) pixels. The temperature resolution was less than \(0.05 \,^\circ \hbox {C}\), and the infrared emissivity of the skin was set to \(\epsilon =0.98\). MAP was measured by attaching a blood pressure cuff to the left finger and upper arm with a non-invasive continuous blood pressure monitor at a 10 Hz sampling frequency.
×

The subject of this study was a healthy adult man aged 22 years. The subject was fully informed of the experimental procedure and the purpose of the study prior to participation. The study obtained official approval from the Life Science Committee of the College of Science and Engineering, Aoyama Gakuin University (Approval number:H17-M13-3). The temperature in the experimental room was set to \(21.0 \pm 0.6^ \circ \hbox {C}\). Figure  2 shows the experimental protocol. The experiments were conducted every hour from 8:00 a.m. to 11:00 p.m. daily. The same experimental protocol was conducted for 3 days to confirm repeatability. To acclimatize to the temperature of the experiment room, the subject entered 15 min before the experiment began. To control the physiological responses to eating, the subject was only allowed three meals: breakfast at 8:00 a.m., lunch at 1:00 p.m., and dinner at 7:00 p.m. sleep time was required to be at least six hours. These restrictions were placed on eating and sleeping times to prevent changes in the circadian rhythm of physiological functions. The experiment consisted of a resting state segment (Rest) and an induced acute-stress physiological response segment (Task). In the Rest segment, subject was asked to rest with eyes closed for 120 s. In the Task segment, subject was asked to hold breath with eyes closed for 60 s to induce acute stress. FTIs and MAP were measured continuously during the Rest and Task, and the last 10 s of each segment were used for analysis.
×

The analysis method comprised five procedures: (1) statistical evaluation, (2) extraction of FTIs, (3) extraction of independent components, (4) correlation analysis, and (5) multiple regression analysis. The details of each procedure are described in this section.

Statistical evaluation was conducted to evaluate the physiological states. A two-factor analysis of variance (ANOVA) was used to measure MAP variations to assess the differences statistically between the two conditions, Rest and Task, and time lapse. A mean value of MAP for 10 s obtained from each experiment was used for the analysis.

FTIs were extracted from thermal images obtained in the experiment. A face detection algorithm based on a single shot multibox detector (SSD) and active appearance models (AAM) was used for FTIs extraction from thermal images [ 17, 18]. An \(82 \times 65\) pixel FTI was cropped from each thermal image based on the face detection algorithm, and the background or subject’s hair was removed. Figure  3 shows an example of FTI. Each FTI was normalized to subtract blackbody temperature and mosaicked to remove temperature fluctuations caused by imperceptible facial movements.
×

Multiple regression analysis was performed to construct the blood pressure estimation model from independent components, excluding the short-term component. Multiple regression analysis is represented as:
$$\begin{aligned} y = \sum _{k=1} {\beta _k x_k} + {\text {Cnst}}. \end{aligned}$$
(6)
where \(\beta _k\) and Cnst. represent the partial regression coefficients and the constant term, respectively. Only MAP at rest was used for the blood pressure estimation model because this study aimed to estimate resting blood pressure. The dependent variable, y, was the mean MAP over 10 s obtained in each experiment at Rest for 3 days. The explanatory variables, \(x_{k}\), were weighting variations \(\mathbf{A}_{\mathrm{{ALL}}}\) excluding the independent components related to short-term variation identified in the correlation analysis. The explanatory variables were optimized using a stepwise procedure based on Akaike’s information criterion (AIC) [ 24].

Figure  4 shows the measured MAP variations in a subject over 3 days. The vertical axis, horizontal axis, and error bars indicate the mean value of MAP, time for 3 days, and standard error, respectively. The solid and dashed lines indicate the MAP in the Rest and Task segments, respectively. The ANOVA shows a significant main effect for conditions ( \(p<0.05\)) and time lapse ( \(p<0.001\)), and there was no interaction. The significant main effect for conditions was caused by blood pressure variation of the cardiac-dominant pattern induced by the task. On the other hand, it has been reported that blood pressure fluctuates based on circadian rhythms [ 25]. The significant main effect of time lapse is believed be caused by the circadian rhythm.
Table 2
Correlation between \(\mathbf{S}_{\mathrm{{ALL}}}\) and other independent components
“ \(\bigcirc \)” represents that correlation coefficients ( R) are greater than the threshold value ( \(|R|>\) 0.8), and the others are represented by “–”
×
×
Figure  5 shows the result of \(\mathbf{S}_{\mathrm{{ALL}}}\) and the corresponding \(\mathbf{A}_{\mathrm{{ALL}}}\). In \(\mathbf{S}_{\mathrm{{ALL}}}\), red and blue colors signify strong features, and white colors signify weak features. In \(\mathbf{A}_{\mathrm{{ALL}}}\), the vertical and horizontal axes indicate the weighting values and the time for 3 days, respectively. Each day is divided by vertical lines.
The results of correlation analysis are shown in Table  2. If the maximum absolute value of thirteen correlation coefficients (| R|) in is more than 0.8, each cell in Table  2 is denoted by “ \(\bigcirc \)” and the others by “-”. The \(\varvec{s}_{12}\) and \(\varvec{s}_{13}\) in \(\mathbf{S}_{\mathrm{{ALL}}}\) were related to \(\mathbf{S}_{\mathrm{{Task1-3}}}\) and \(\mathbf{S}_{\mathrm{{Rest1-3}}}\), respectively, as shown in Table  2. These components are expected to be long-term components related to circadian rhythms and represent rhythms that are reproducible for three days. The \(\varvec{s}_{3}\) in \(\mathbf{S}_{\mathrm{{ALL}}}\) was not correlated with the other observed signals, as shown in Table  2. The corresponding weighting variation \(\varvec{a}_{3}\) qualitatively shows a time series of cyclic variation compared to other weighting variations, as shown in Fig.  5. ICA was applied to the FTIs dataset with Rest and Task arranged alternately because it assumed that the blood pressure variations were represented on the FTIs. It is considered that \(\varvec{a}_{3}\) was affected by blood pressure variations by acute stress. Therefore, \(\varvec{s}_{3}\) corresponding to \(\varvec{a}_{3}\) is expected to be a short-term blood pressure variable component related to acute stress. It could be shown that a short-term blood pressure variable component related to acute stress could be separated and extracted from FTIs.
Table 3
Results of multiple regression analysis
Bold cells indicate the excluded independent components. The hyphen indicates the variables not selected as explanatory variables
× 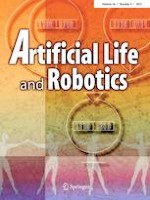 Development of an autonomous forearm-supported walker for nursing facilities

Development of a compact sewerage robot with multi-DOF cutting tool