Computational analysis of flapping-wing aerodynamics with wing clapping was one of the classes of computations targeted in introducing the space–time (ST) interface-tracking method with topology change (ST-TC). The ST-TC method is a new version of the deforming-spatial-domain/stabilized ST (DSD/SST) method, enhanced with a master–slave system that maintains the connectivity of the “parent” fluid mechanics mesh when there is contact between the moving interfaces. With that enhancement and because of its ST nature, the ST-TC method can deal with an actual contact between solid surfaces in flow problems with moving interfaces. It accomplishes that while still possessing the desirable features of interface-tracking (moving-mesh) methods, such as better resolution of the boundary layers. Earlier versions of the DSD/SST method, with effective mesh update, were already able to handle moving-interface problems when the solid surfaces are in near contact or create near TC. Flapping-wing aerodynamics of an actual locust, with the forewings and hindwings crossing each other very close and creating near TC, is an example of successfully computed problems. Flapping-wing aerodynamics of a micro aerial vehicle (MAV) with the wings of an actual locust is another example. Here we show how the ST-TC method enables 3D computational analysis of flapping-wing aerodynamics of an MAV with wing clapping. In the analysis, the wings are brought into an actual contact when they clap. We present results for a model dragonfly MAV.
Anzeige
Vorheriger Artikel A plug-and-play coupling approach for parallel multi-field simulations
Nächster Artikel Efficient numerical simulation of aeroacoustics for low Mach number flows interacting with structures 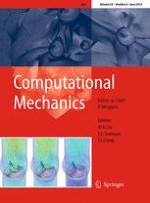